HOME DOLLAR CLUB SPECIALS ABOUT US CATALOG CONTACT US 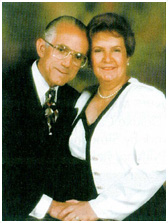 A Story of Hard Work, Integrity, and Focus

If Tirso George, Founder of San Francis Imports, can’t do business on a hand-shake basis, then he’s not interested. Not that there aren’t formal contracts to sign, but he counts integrity in a relationship as the key to good business, especially in the Catholic religious goods market. His three sons, Tirso, Jr., Carlos and Oscar, who contribute to in the business, feel the same way; which means a smooth transition if George, Sr. decides to retire one day.

Raw Determination & A Clear Focus on the Goal

There’s a reason for George, Sr.’s handshake approach to business. He fled Fidel Castro’s communist Cuba more than 30 years ago with his wife, Matilde, and their children, ultimately settling in San Francisco. He soon began working two full-time jobs to support his family. With the help of Matilde, George launched a side business selling religious goods door-to-door from the trunk of his car. This was the beginning of San Francis Imports. His early customers were mainly from Spanish-speaking communities in San Jose, Fremont, Modesto and other locales near the San Francisco Bay Area, and he took pride in the trust they placed in him.

A deeply religious man, George, Sr., believed it was important to offer inspirational religious gifts at very affordable prices. If a religious gift inspires a person, then Tirso George, Sr. wants the person to be able to afford it. It is that simple, and a goal from which he has never wavered in 30 years. Combined with his strong work ethic, this goal is the cornerstone of San Francis Imports, Inc.

“If you like the work hard, then this is the place to be,” says Joe Gamgene, General Marketing & Sales Director for the company. “We’re very committed to providing genuinely inspiring Catholic gift items at affordable prices, and we work hard to achieve that goal. Tirso George Sr. is a very ethical, hard-working person and his Catholic Faith is very important to him.” As George Sr.’s business grew, he gave up his other jobs. He also realized that Southern California harbored a larger Spanish-speaking population than Northern California and he relocated the company to Burbank.

Customer Service and the Latin Market

Although it began by primarily serving the Spanish-speaking community and all employees of the company are fluently bilingual, San Francis Imports, now serves a much wider clientele in the United States Canada, Latin America and elsewhere. Because of its long-time involvement with the Spanish-speaking market, the company understands this market segment particularly well. Five years ago, Gamgene observes, business did not give this market share much thought, but now it has become a regular aspect of most company portfolios. He emphasizes that it is not comprised of only Mexicans but instead includes Cubans, Salvadorians, Spaniards, Puerto Ricans and many nationalities from Latin America. Catholic devotions in each of these cultures can vary widely. For example, Our Lady of Guadalupe is very close to the hearts of Mexicans, but Cubans will respond more enthusiastically to Our Lady of Charity (Caridad del Cobre) and The Divine child is revered in Puerto Rico. Gamgene also notes that tastes change among different generations. The American-born children of Spanish-speaking Catholics tend to prefer English language products, whereas many parents and grandparents still prefer books and prayer in their native language.This is a new market to some Catholic retailers and some have been so appreciative of San Francis Imports’ consistent willingness to help them serve their customers that they have even called the company for help in translating what a Spanish-speaking customer wants. “They’ll actually put the customer on the phone with us,” says Gamgene. “And of course, we’re glad to help!” We’ll do whatever it takes to help get inspirational gifts to the customer.”San Francis Imports offers retailer benefits. Gemgene lists highly competitive pricing at the top, followed by same day/next day shipping. “I deal with a lot of the major retailers,” explains Gamgene. “What I see repeatedly is that they are surprised by our pricing. We want to offer a better profit opportunity for the retailer and that puts a lot of pressure on us to work harder, better and to keep costs down.” The company also offers point-of-sale floor and countertop displays for holy cards, rosaries, and magnets, in addition to sales promotions and incentives and catalogues for various religious occasions.